Located in the Northeastern part of India Manipur is an extraordinarily beautiful place full of charm and beauty. The state of Manipur has all the facilities of entertainment for the people.  Manipur offers something or the other for each and every visitor. So be it watching theater or shopping in the bazaars of Manipur, there are enough ways by which one can keep him or her busy in Manipur. 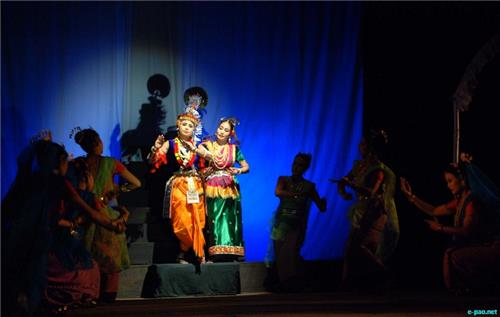 Theatre and society in Manipur are intimately linked. It is one of the few north-eastern states in India where theatre shows are held regularly for the entertainment of the people. Theatre has played an important part in the Laiharaoba festivals. The theme of the theater in Manipur is based both on religious as well as different social aspects as well. The Chorus Repertory Theatre is situated in Imphal. This theatre association has churned out internationally reputed plays.

In the year 1920, Motion Picture or Cinema was first introduced in Manipur. The first Motion Picture theatres in Manipur were set up in Imphal after the Second World War. Shree Govindajee Film Company (SGFC) founded in 1946 and 1947 pioneered the filmmaking in Manipur. Mainu Pemcha in 1948 was the result of the first attempt at making films by the Manipuris. 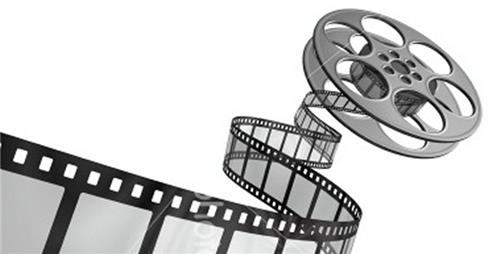 On the 9th of April, 1972 the first full fledged feature film Matam-Gi Manipur was screened at Usha Cinema, Friends Talkies in Imphal and Azad cinema in Kakching. Manipuri Cinema got the required momentum, with the establishment of Film Society in 1966, Imphal Cine Club in 1979 and Manipur Film Development Council (MFDC) in 1980 and made an indelible mark both at the National and International level.

In the history of Manipuri Cinema the 70s was a successful decade. Olangthagee Wangmadasoo, a Manipuri film directed by Aribam Syam Sharma was as huge a blockbuster as Sholay. Led by Aribam Syam Sharma the 1980s brought a shift in Manipuri culture. He abandoned his Bollywood style dance and song and he went on to create very serious movies named Imagi Ningthem. With the emergence of very violent confrontations and multi-layered conflict in Manipur the 90s saw a decline in Manipuri cinema. This was when Hindi films were banned in Manipur

With a force since imposition of ban on the screening of Hindi films in cinema halls in the state, Manipuri films have started gaining its momentum. Despite reiterated appeals made by the successive Chief Ministers  screening of the Hindi movies have come to a halt in this border state.This move has given fresh impetus to the film producers, artists and film lovers in Manipur 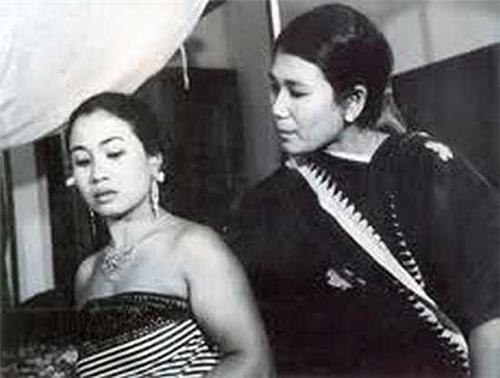 Imagi Ningthem (My precious son) in 1982 bagged the Grand Prix awards for best feature film in the festival Des Three Continents at Nanes in France and Best Child Actor award of National film festival in the year 1982. Ishanou - another Manipuri Feature film won a special mention award for the lead actress -selection officially in the Cannes international film festival, France, in the section Uncertain Reard in the year 1991. This film also gained the National award in 1991. Manipuri short film Pebet got the Best Short Film (Non Fiction) in the international short film festival held in Kolkata in the year 1985.

The non feature film Sangai, the dancing deer of Manipur received  5 awards for Artistic Excellence in choreography,  Interpretation of an Animal's Spirit, delicate depiction of wildlife,  Fostering cultural perspective of conservation and Inter relationship between animals and human being in the 12th International wildlife film festival of 1989 held at Montana. In the same festival, the Deer on the Lake, a 16 mm documentary film received another merit award.

During the year 2012 Leishangthem Tonthoi, the maker of 13 films by the then was the rising star of Manipuri cinema. In 2012 Tonthoi won the Rajat Kamal award for Best Supporting Actress at the 59th National Film Awards. Manipur was making its mark through low budget films and more and more films were being shot in Mnaipur. 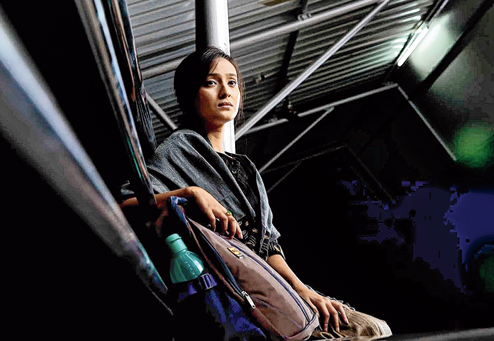 In the year 3013 the most notable film was CM Munaan produced by Ranbir Thouna and directed by Chou-En-Lai. "Eidee Kadaida" also entered the 61st National Film Awards.

The documentary films of Manipur too, are low budget.  Documentary films, unlike Manipuri cinema, revolve around political and social issues. AFSPA 1958, directed by Bachaspatimayum Sunzu was a film about an issue uppermost in the minds of many Manipuris. Another documentary Real directed by  Bona Mesihnam is a film about HIV positive persons has been included by New York's Museum of Modern Art in its archives.

Awards and Recognitions for Manipuri Films

Manipuri film director Aribam Syam Sharma  gained an award each in the feature and non-feature categories, a rare feat for a filmmaker in the year 2013 . Sharma had won in both the categories in the 1991 National Film Awards as well. Sharma's feature film 'Leipaklei' won a Rajat Kamal and Rs 1 lakh for the best Manipuri regional film. His 'Manipuri Pony' won in the best exploration and adventure film category (including sports) in the non-feature film section for which he will be awarded a Rajat Kamal and Rs 50,000. 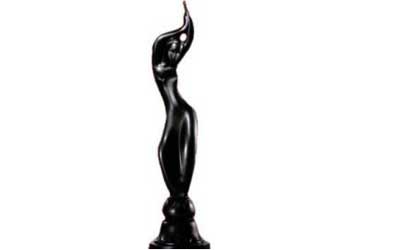 Out of the first 28 feature films produced, nine films won national awards. A statistical view reveals that every third film produced in Manipur has won a national award. By and large, Manipuri films have surpassed other regional films in terms of quality inspite of the low costs and other handicaps.
Out of the first 28 non-feature films produced so far, 7 to 8 documentary films of Syam Sharma brought laurels to Manipur in national as well as international levels.

The following  Manipuri films were shown in Film Festivals on International level.

Manipuri Film Imagee Ningthem (My Son, My Precious) directed by Aribam Syam Sharma and scripted by MK Binodini was first Indian Film to won the Golden Montgolfiere at the "Nantes Three Continents Festival. The Eight Year old Leikhendra Singh  won  the Best Child Actor in India awards in the year 1982.

Pavan Kumar, with his heart wrenching and brutally honest documentary on civilians in Manipur under the shield of Armed Forces Special Powers Act (AFSPA  won the Critic's award at the Mumbai International Film Festival and was also critically acclaimed at the Toronto Film Festival, and Karachi Film Festival .

Some Great Manipuri films of the Golden Era

Imphalwood also has  shown us some great monies which includes:

Some the major film that has made by the Manipur film industry includes: 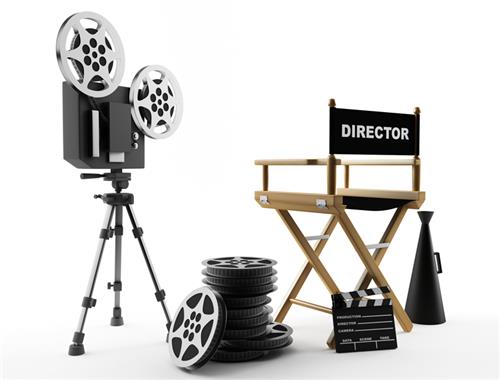 The film industry of Manipur also has some very good directors. Some of the notable directors of Imphalwood  are mentioned below:

Notable Manipuri Actors and Actresses of the 21st century

Some of the best actor and actresses  of Manipur Film industry are mentioned below:

Some facts about Manipuri Films 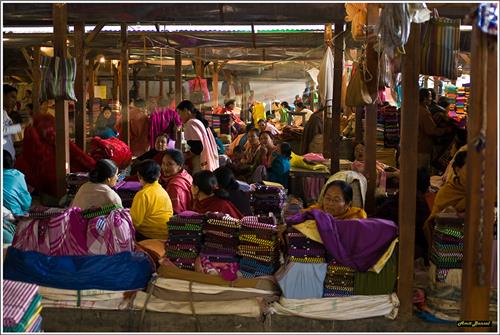 Shopping is a favorite activity of the people of Manipur. Tourists coming to Manipur can have the opportunity of shopping in this beautiful state the intricately designed traditional goods and also foreign goods. The people of Manipur are known for their fashion sense in the whole country. In Manipur one can have the wonderful time of shopping in the shopping centers, markets and shops. Foreign goods are the main highlights of the shops and the malls located here. One can shop at the Manipur mall mantripukhri. Products from Bangkok to Beijing, France to Italy are available in the mall.  In the shops located in Manipur one can have a splendid experience of shopping handloom cloths and handicrafts. Manipuri sarees, shawls, bedsheets, blankets and Manipuri handicrafts items are one of the beautiful things one can shop from the markets and shops of Manipur.

Dance and Music in Manipur 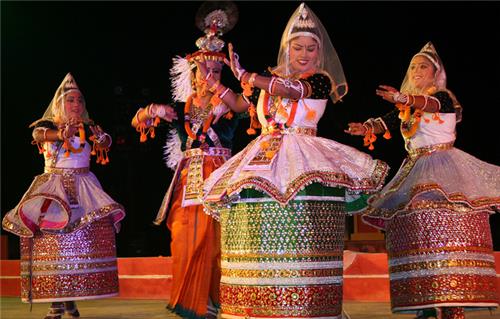 Dance and music are the integral part of entertainment in Manipur. Manipuri Dance is one of the classical dance forms of India. Ras leela dance performed by the artists has a charm of its own.  Some of the very popular dance form of Manipur includes Khamba Thoibi dance, Maibi Dance, Pung Cholom, Nupa Pala.

Both hill and valley people of Manipur are very fond of music and songs.  Dance and music of Manipur are forms of divine entertainment here.   There are various forms of Music in Manipur which includes:

Khullong Ishei  is a folk song commonly sung by the Meitie people of Manipur  in villages when they go for fishing  or to work in the fields . Khullong Ishei domt have a set system of words and sentences. The theme of the song is love. The singer adjusts his words and stanzas of verses of his own to the tune.

Pena Ishei is accompanied with the music produced through Pena.  A Pena is a musical instrument, in which a slender bamboo rod is attached to the round dry shell of gourd of coconut. The bamboo rod is held in the left hand and the drum shell is pressed against the chest t o produce music. The curved iron rod is held in the right hand. The string on the bamboo is rubbed with that on the curved iron rod. The theme of the song is the love story of Khamba-Thoibi.

The theme Thoubal Chongba is religious. It is song sung during the Thoubal chongba dance.

Nat is is used during the ceremonies such as marriage, Upanayanams.  It is a form of classical music.

Gaur Padas are songs in praise of Chaitanya Mahaprabhu
.

Dhob is sung with a large cymbal known as Jhal. The song is accompanied with the Manipuri style of beating of the drum.

Napi Pala is a devotional song sung by women. It The small cymbal called Mandira is used during this song.

Khubaishei is a clapping music. No cymbals are used and the songs are sung accompanied with the clapping of hands. If the Khubaishei is sung by women only, then it is called Nupi khubaishei. It is sung in a standing position.

Raslila songs are a class by themselves due to their special thematic approach. The songs carry deep religious essence. The tribal songs and music have variety and quality.

Apart from the traditional and religious songs and music, the people of Manipur are also fond of heany metal and rock music. The state is also a home to many talented metal and rock bands. These bands of Manipur went on to Rocked the Nation, with their fret-board wizardry, powerful and soaring vocals. Out of the number of rock bands that has emerged from Manipur, special mention must be made of three extremely talented Core Rock Bands of Manipur during the 90s are The Cannibals, The Dark Krusaders and Phynyx.  These three Legendary Bands who heralded a Rock Music Revolution in the Hills and Valleys of Manipur at different phases of time. 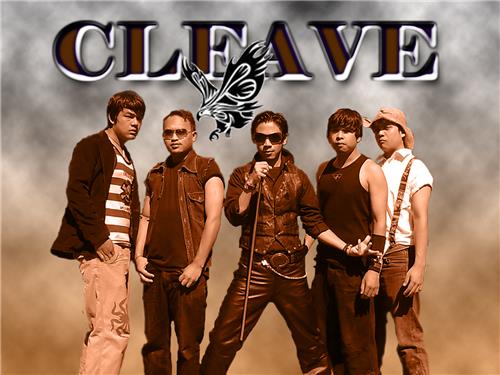 In recent times Cleave -the Rock Band of Imphal, Manipur is one of the most rocking Band from north east India. In the year2009-2010, this talented rock band won the Manipur Rock Fest, including best Vocalist, best Bassists and best Drummer. There is also number of growing new Bands in Manipur and are getting famous for the talent of music they perform. Some of them includes Recycle, Dazzle City Stepping Stones, Cygnus and Angellica. 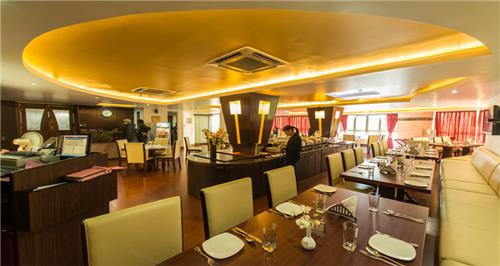 Visiting hotels and restaurants also helps in the entertainment of the people. One can relish finest cuisines in the many hotels located in Manipur. Mention may be made of the Hotel Imphal , State Guest House, Assembly Guest House, Youths Hostel, Hotel White Palace, Hotel Apollo and so on.
If you are in Manipur you must definitely try the local dishes of Manipur. You must definitely try Iromba, a special Manipuri dish. Other special dishes in Manipur includes Yongchaak singju,Monica gi chakum,Aloo mattar and smoked fish,Bora - a kind of pakora,Kanghau,Aloo angouba - fried potato, Pakoura mah, Nga atauba - fish fry, Nga athongba - curried fish,Khajing bora,Khangau. Some must visit restaurants in Manipur includes Fresh Point,classic restaurant,Naoba's Chakhumang,Uptown Cafe,Fire Bowl Restaurant.