Aimol Tribe Manipur presents a variety of traditions and cultural patterns. The most important aspect of Manipuri culture is that the people of Manipur have retained the traditional style along with the contemporary ones. 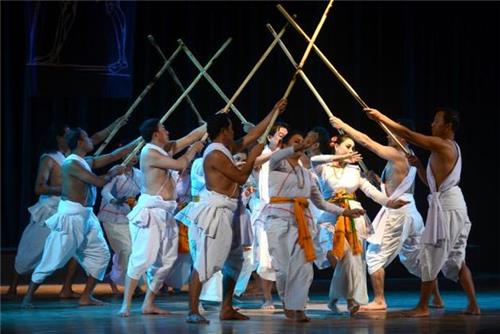 Manipur is a land of festivities. Throughout the year different festivals are celebrated by the different tribes of the state. Lai-Haraoba, Yaoshang, among others, are the main festivals of Manipur.
Manipuri people are also very enthusiastic about their food. The cuisine of Manipur is healthy and organic. The food of Manipur is both vegetarian and non vegetarian. 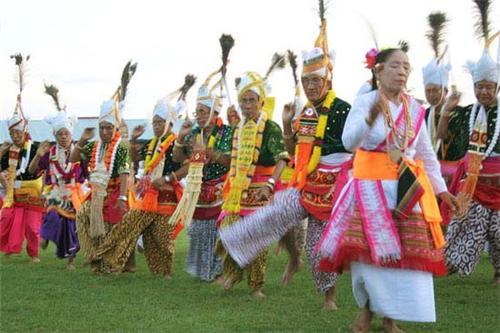 Aimol people mostly inhabit in Chandel district of Manipur. The word Aimol means a talisman or spells of magic chanted to cause a black magic. According to the other meaning Ai is a crab and Mual means valley. This tribe speaks the language which is a form of Tibeto-Burman language. They mostly practice the slash and burn agriculture. They are mainly Christians.

Gangte is one of the Kuki tribes mostly residing in Manipur. According to 2001 census, about 15, 100 Gangte people reside in Manipur. The word Gangte is named after the place carrying Ganggam. The word Gangte means person from Ganggam. The Gangte society can be divided into Thadou, Hmar, Lushai, Paite, Simte, Vaiphei and Zou. The Gangte people speak the Kukish languages, which belong to the Tibeto-Burman family. Gahmasa Kut and Chapchal Kut are the major festivals among the tribe.

Kom tribe is one of the major tribes in Manipur. This tribe is mostly found in Senapati and Churachandrapur districts. They are rich in cultural and traditional heritage. A large number of Kom people follow Christianity. Farming is the main occupation of the tribe and they produce potatoes, millets, rice, maize and others.

Chothe tribe also known as Chowte or Chawte is a clan of the Kuki tribe inhabiting in Chandel district of Manipur. According to 2001 census about 2676 Chothe people live in Manipur. They follow Christianity. The Chothe man makes bamboo baskets and the women’s collects from firewood from the forest and sells them in the market.

Monsong community mostly lives in Chandel district of Manipur. Their language is similar with the Anals. Monsangs can be divided into two clans namely Simputi and Rinheti. The each clan is divided into 7 groups. They are mainly dependent on agriculture; many of them too have established trading expertise.

Chiru community of Manipur is found in various districts of the state. The word Chiru means the seed of a plant. This tribe has some similarity with the Naga tribe. The tribe has own custom and traditions. A large number of Chiru people are involved in farming. They involve themselves in the growth and trading of fruits. They also practice the shifting cultivation. This tribe is also expert in weaving, carpentry and craftsmanship.

Koireng is a tribal community in Manipur. This tribe belongs to the old Kuki clans of the Kuki-Chin group. According to last census 1056 Koireng people live in Manipur. Their economy mainly depends on agriculture.

Maram is a Naga tribe in Manipur. They belong to the sub-family of the Sino-Tibetan family. Ponghi, Rakak and Kanghi are the main festival among the tribe.

Hmar tribe is scheduled caste in Manipur. This tribe belongs to the chin-Kuki-Mizo groups. Hmar tribe can be divided into many groups like Faihrein, Khawbung, Sakum, Ngente, Pakhoung. This tribe is dependent on forest. Shifting cultivation is the main occupation of the tribe. They also practice black smithy, carpentry, basketry and poultry.


Art and Craft of Manipur

Manipur is a state of unique art and culture. People of Manipur are very enthusiastic about their traditional art forms. Each ethnic groups of Manipur has its own distinct art and craft forms. The handicraft and handloom of Manipur is famous worldwide for its craftsmanship, colorfulness and sheer beauty. The people here are artistic and creative.

The art and craft of Manipur has a uniqueness of its own. They are very intricately made and beautiful to look at. Tourists coming to this northeastern state are mesmerized to see the sheer wonder of art and craft of Manipur. The tribes are apt in making different kinds of cane and bamboo products and in weaving. These products have now received recognition not only in the national market but also in the international market and are much in demand. 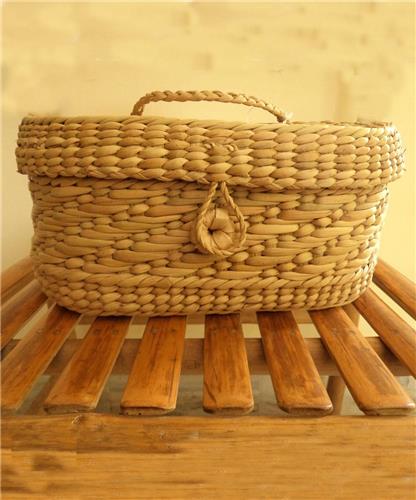 Basketry is one of the famous occupations of the people of Manipur. The abundance of bamboo and cane facilitates basketry in Manipur. Baskets of varied shapes and sizes are prepared by the people. The baskets are made for domestic purpose, social and religious ceremonies. The basket items are Heijing Kharai, Likhai, sangbai, lukmai, Meruk and so on.Other than basketry fishing equipments are also made by people. Mairing and Meities are adept in making these products. 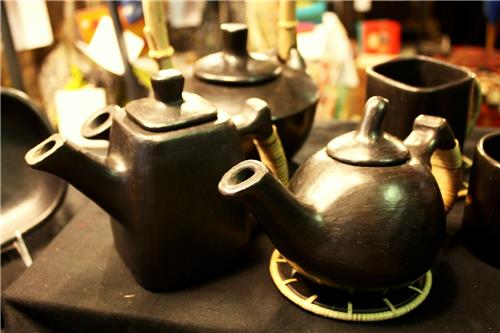 Pottery is also one of the important occupations of the people. The pots made here by the people are of different shape and size and are beautifully decorated. 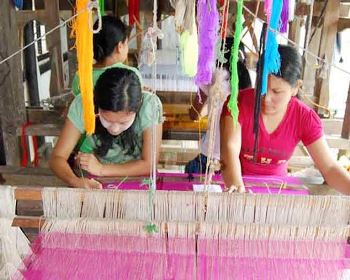 
Handloom industry is the largest cottage industry in Manipur. The distinctive feature of the handloom industry is that women are the only weavers. According to the National Handloom Census report 1988 there are 2.71 lakh looms in Manipur. Chitnu Tamitnu is considered the goddess of handloom. It is believed that she discovered handloom in the state. Manipuri shawls and sarees with intricate fabric and design are the specialty of handloom in the state. Bed sheets, bedcovers, tribal shawls, curtains, screens and gowns made here are also famous throughout India.

The staple food of the Manipuri people includes rice with vegetables and fish. Ngri is one of the most favorite food of the Manipuris. It is a type of fermented fish and carries a distinct smell and is loved the most by the people of Manipur. Other than that Iromba, Chamfoot, Morok and the various herbs are the main food items.

The Manipuris grow vegetables in kitchen gardens for regular intake. As such, the taste is different from the mainland cuisines. The people here use chili pepper other than the regular Garam masala to cook their food. Some of the vegetables eaten here are found only here like the Yendem (a kind of taro), Chawai, Hawai Mana, Koukha ( herb root), Loklei, Pulei; Komprek. The people also have mushrooms as an important part of their cuisine. The mushroom types include Uyen, Uchi-na (black slimy mushroom), Chengum, Kaglayen (lichen). The Manipuri people also eat fermented soya bean called Hawaijar and fermented fish dish called Ngari.

The dishes eaten by the Manipuri people include among others: 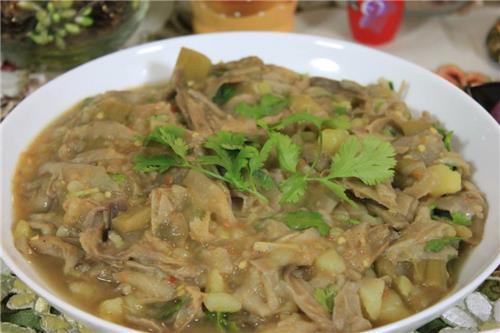 Ras Lila is one of the major Indian classical dance forms. Ras Lila is the epitome of Manipuri classical dance. It is based on the eternal love of Radha and Krishna as has been described in the Hindu scriptures. It is performed in front of temples. A deep sense of devotion is required to perform the dance form. It is performed at the temples of shree shree Govindjee in Imphal in the night of Basanta Purnima, Sarada Purnima and Kartik Purnima. 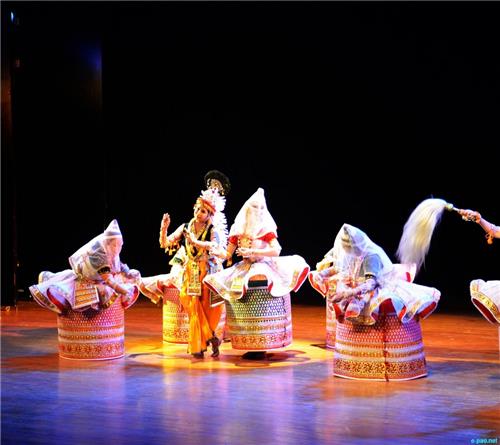 It is said that king Khuyoi Tompok was a great patron of art and culture and developed Manipuri dance in the 2nd century AD. With the introduction of Vaishnavism in the 15th century the dance form started becoming familiar. The dance form found expression outside Manipur by the efforts of Rabindranath Tagore.

The dance form is a medium of worship and enjoyment. It is considered a door to the Divine. It is an inseparable part of all socio-cultural activities. The movement in the Manipuri dance form is subtle, delicate and graceful compared to the other Indian classical dance forms. The dance is accompanied by Pung, Kartal, Pena, Flute, harmonium, esraj, shankh and a singer.

The costume of the dance is colourful and elegant. The female dancers a costume called ‘Patloi’. The lehenga is called ‘Kumin’. 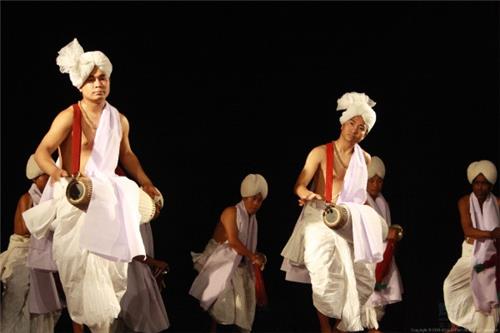 Nupa Pala is a group performance of male partners using cymbals and wearing white turbans that sing and dance to the accompaniment of Mridanga. The dance performance acts as a prologue to the Ras Lila. Nupa Pala dance is also known as Kartal Cholom or Cymbal Dance. The dance is started in a slow motion and the initial movements of this dance are soft and calm and slowly the people who are dancing dance with more speed. This dance is basically a group performance of male dancers using cymbals and wearing snow white ball-shaped large turbans. 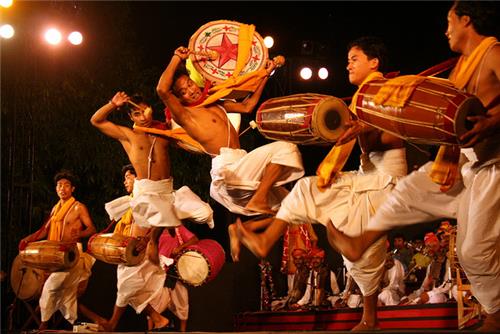 
Maibi dance is performed during the festival of Lai-Haraoba which is an annual ritual festival of the people of Manipur. In this dance the Maibis which are the priestesses and are considered to be spiritual mediums. They dance in a way describing the whole concept of how Manipuri people live. 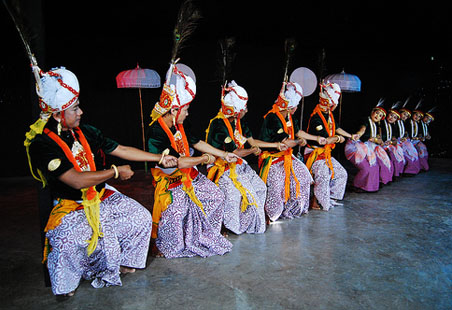 Khamba Thoibi dance is a duet dance comprising a male and a female partner. The dance is dedicated to the sylvan deity. The description of the dance is Thangjing of Moirang and is performed by Khamba and Thoibi, the hero and heroine of the Moirang episode of the hoary past. 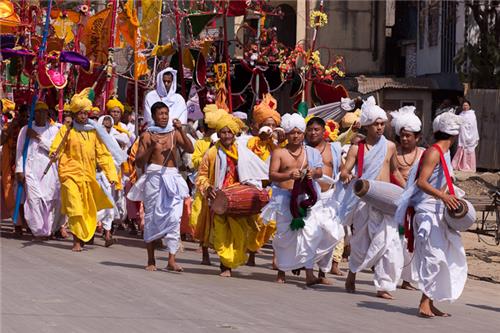 Yaoshang festival is the premier festival of Manipur and is also known as Dol Jatra. The festival is celebrated for five days starting from the full-moon day of Phalgun i.e. month of February/ March. An inseparable part of this festival is the Thabal Chongba dance.


Ratha Jatra is an important festival of the Hindus living in Manipur. The festival is celebrated for 10 days in the month of Ingen(June/July). In this festival Lord Jaganath leaves his temple in a Rath and the rath is pulled by pulled by pilgrims.

Ramjan Id is the most popular festival of the Manipuri Muslims (Meitei Pangal) in Manipur. During this festival Muslims practice self denial of food, drink and other items. And keep a fast; this fast is broken on the day of Id-Ul-Fitre. 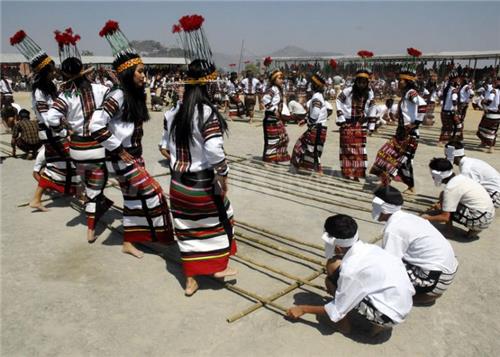 Kut festival is a festival of the different tribe’s of Kuki-Chin-Mizo groups of Manipur. The festival is celebrated on 1st November in the month of autumn and is a happy occasion for villagers whose food stock was plentiful. The festival is a thanks giving festival and is in the honour of the giver of an abundant harvest.

The people of Manipur celebrate Christmas with joy and happiness by praying Jesus Christ, eating and singing. 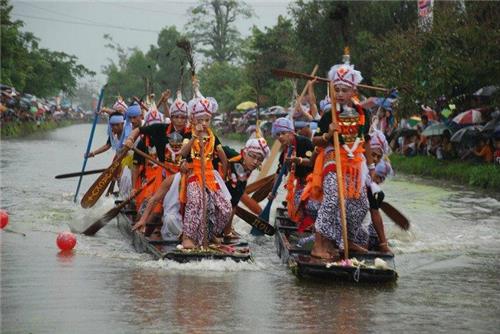 Heikru Hidongba is celebrated in the month of September. The festival is a boat race which is celebrated with full joy. Long boats are used to accommodate a large number of rowers. Idol of lord Vishnu is installed before the commencement of the race.

Ningol Chakouba is a social festival of the people of Manipur. In this festival the married women of the family come. The festival is celebrated in the month of November on the second day of new Moon.

Lui Ngai Ni is also known as seed sowing festival. It is a collective festival of Nagas observed on the 15 February every year. In this festival the Naga tribes start their cultivation by sowing seeds. 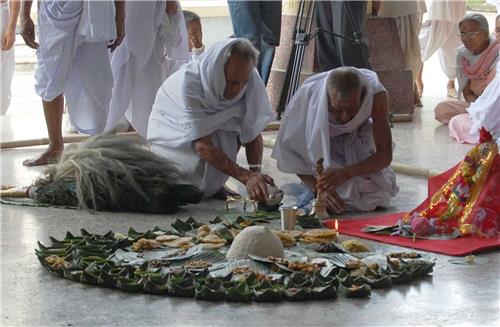