The state of Manipur is known for the indigenous and traditional games played by the people. Manipur has a history of indigenous games which are played from historical times. These games hold a significant part in building up the physical buildup and active nature of the people.

Sports in  Manipur dates back to the time of ancient history. The Department of Youth Affairs and Sports is responsible for the implementation and promotion of youth welfare programmes and games in Manipur. The people of Imphal plays many games which include: Sagol Kangjei , Thang Ta & Sarit Sarak, Khong Kangjei, Yubi Lakpi, Mukna, Hiyang Tannaba and Kang. 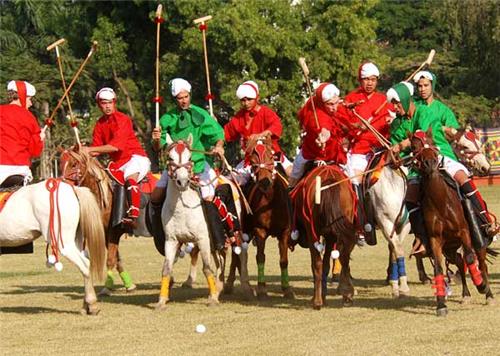 The modern game of Polo originated in Manipur. Polo is played with seven players on each side. The players are mounted on ponies which are not more than 4-5 feet height. Each player has a polo stick made of cane. The ballused is the game is made of bamboo root. The ball is hit hard by the players into the goal. Today the game is played in two different form the PANA, original Manipuri style and Polo, the International style. 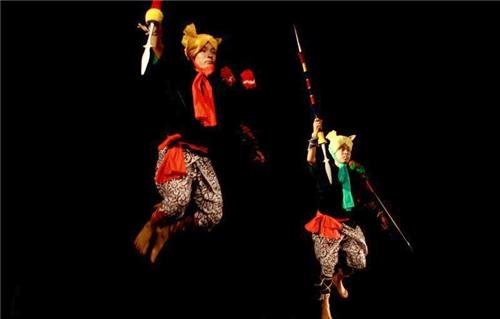 Manipuri Martial Art is a very skillful and energetic art. In the olden times when every Manipuri was a warrior and were bound to serve the country at the time of war, this art was a way to sharpen their battle craft. Todat, martial arts is being performed widely by women and children as well. 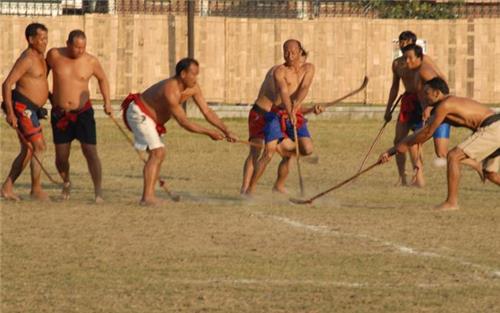 Khong Kangjei or the Manipuri hockey is also very popular game among the people of Manipur. Like polo, this game is also played with 7 players on each side and each player is given a bamboo stick made in the formof modern hockey stick. The game begins with a throw of the ball in the field and the player is allowed to carry the ball in any way possible to the goal. A player can even kick the ball but the goal can be only scored by hitting the ball with the stick. There is no goal post and in order to score the goal the player has to score the goal line completely. 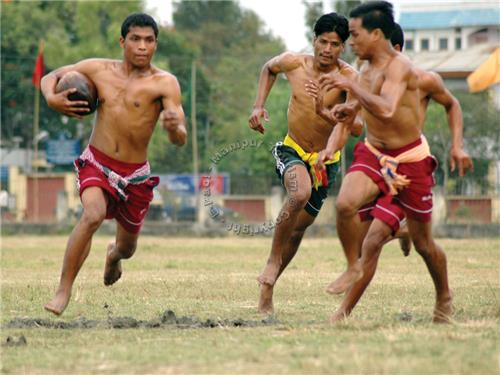 In Manipuri language "Yubi" means a coconut and "Lakpi" means snatching. Similar to the other games, each side has seven players. A rectangular box is made in one end of the field; one side of the box forms the central portion of the goal line. In order to make a goal, a player to approach the goal from the front with his oiled coconut and cross the goal line. 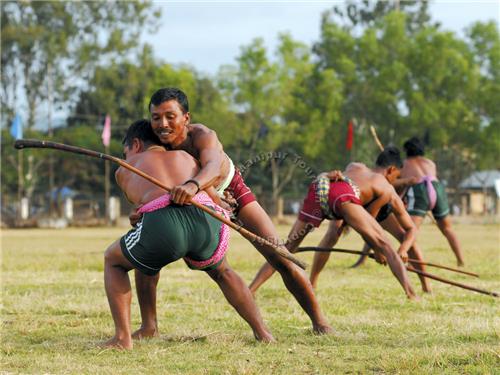 Manipuri wrestling is also another highly popular and prestigious game played among the Manipuris. The game enjoyed royal patronage in the olden times. This game is played between two male rivals by sheer physical strength and skill.

Kang is mainly played during the 'Cheiraoba' and the Rath Yatra festival. This games is played on mud floor and one has to hit the fixed targets with the "Kang. Each team has seven male players. The people of Manipur believes that if the game is played beyond the given time limit, evil spirits may capture the mind of the players as well as the audience. 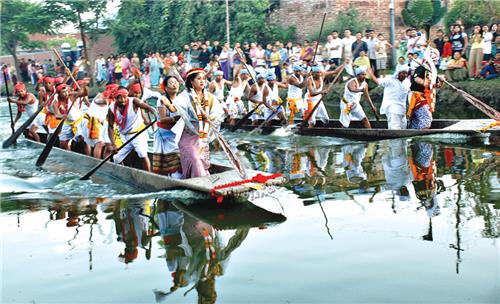 This game is normally held in the month of November at Loktak lake and Thangapat. The boats used in this game are called Hiyang Hiren. The people of Manipur believes that the boats are endowed with spiritual powers. The Meiteis believes that if Hiyang hiren is worshipped it will negate evil omens. During the times of natural calamity, the game is also played by the people of Manipur.

It is an outdoor game played mainly by females. According to mythology this game was played by the Gods. The rules of this game are much similar to Kabaddi game.

Sports Associations and Clubs in Manipur

The Youth Affairs and Sports Department of Manipur is the main agency for promotion of games and sports and implementation of youth welfare programmes in Manipur. The Directorate Office of the Department is situated at Khuman Lampak Sports Complex in Imphal. The department implements various schemes for the development of Sport and Youth Welfare in Manipur.  Regular tournaments in the State Level are organised by it. 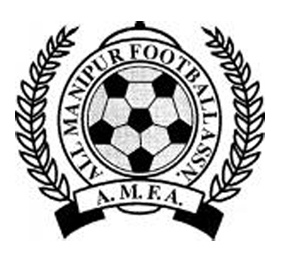 The MOA was formed in the year 1977 under the chairmanship of Shri R.K Madhuryyajit Singh as President and Shri B.C Singh as Secretary. The Association is affiliated to Indian Olympic Association (IOA). The MOA is an apex body for the development of sports activities in the state.

The Manipur Mountaineering and Trekking Association was formed on 21st September,1980.  The association continues to respond to the environmental challenges and it also promotes adventure ecotourism. The objective of the association is to build a strong nation by shaping the young talent through its well-defined programmes. 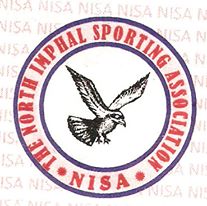 North Imphal Sporting Association (NISA) is a Football Club based in Manipur, India. NISA is the present champion in the Manipur State League. Since its inauguration in 2006, NISA won the Manipur state League for three times. 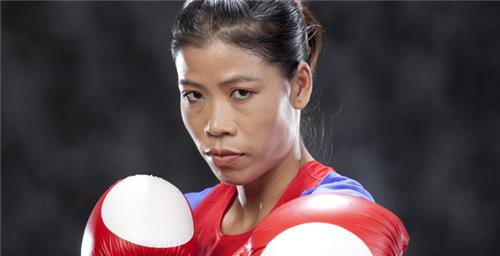 Mangte Chungneijang Mary Kom also known as MC Mary Kom was born on 1st March 1983 in Imphal She is an Indian Boxer and is a five-time World Amateur Boxing champion. Mary Kom is the only woman boxer to have won a medal in each one of the six world championships. She became the first woman boxer from India to have won a Gold Medal in the Asian Games in 2014 held in Incheon, South Korea. 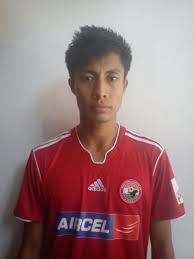 Soram Poirei Anganba was on born 24th December, 1992. He is an Indian footballer who plays currently as a goalkeeper for Bengaluru FC of the I-League. 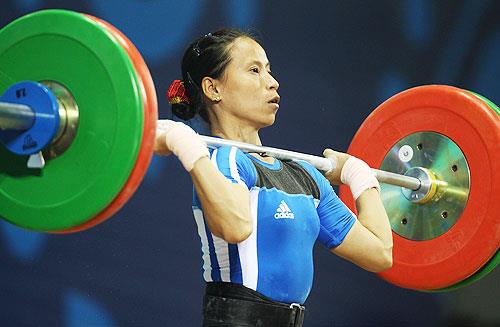 Ngangbam Soniya Chanu born on 15th February 1980. She is an Indian Woman Weightlifter. Soniya Chanu won the silver medal in the Women's 48 kg category at the 2010 Commonwealth Games.

Tingonleima Chanu was born on 1st April, 1976). She is a member of the India women's national field hockey team.She was awarded the the Arjuna Award.

Gurmayum Anita Devi is a famous mountaineer from the state of Manipur. The  Government of India honoured her with the Padma Shri award  in 2004. 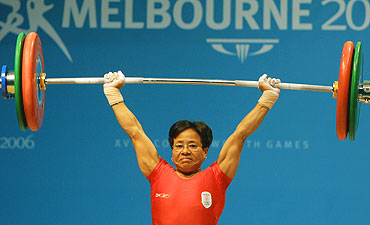 Nameirakpam Kunjarani Devi was born 1 March, 1968.  She is noted weightlifter from the state of Manipur. She received the Arjuna award in 1990 and also shared the Rajiv Gandhi Khel Ratna award with Leander Paes for the year 1996-1997. She also won the K.K.Birla Sports award in the same year. 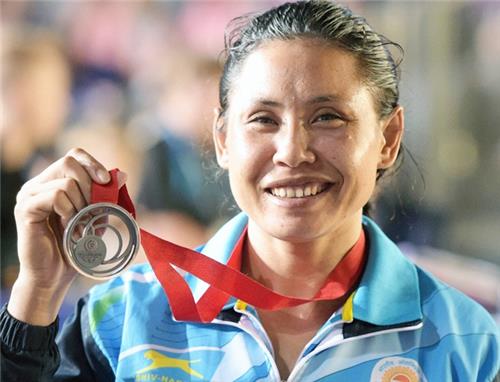 Laishram Sarita Devi was born on 1st March 1985. She is an Indian boxer  and a national champion also won a gold at the World Championshiops in New Delhi in 2006. The Government of India honoured her with the Arjuna Award in the year 2009.

Suraj Lata Devi was born on 3rd January 1981 in Manipur. She is the is the former captain of the India women's national field hockey team. Suraj Lata Devi led the Indian Hockey team  to the Gold for three consecutive years: during the 2002 Commonwealth Games (the 2003 Afro-Asian Games, and the 2004 Hockey Asia Cup. 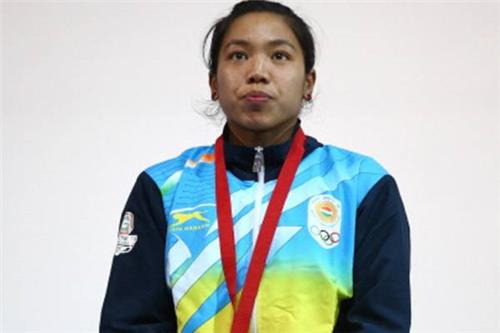 Saikhom Mirabai Chanu was born on 8 August 1994.  Mirabai Chanu is an Indian weightlifter who won silver medal in the women's 48 kg weight class at Commonwealth Games, 2014 at Glasgow. 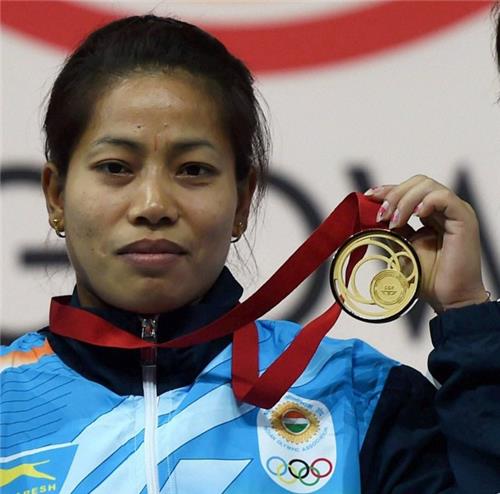 Khumukcham Sanjita Chanu was born on 2nd January 1994. She is an Indian weightlifter who won gold medal in the women's 48 kg weight class at the Commonwealth Games , 2014  at Glasgow
Dingko Singh. 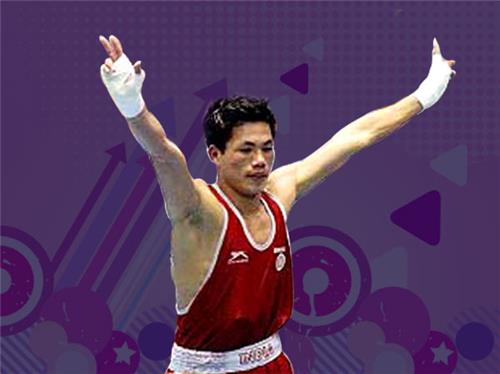