Manipur is one of the few states of the North-east that is visited for its religious places too. There are various churches in Manipur and temples which have architectural and historical importance too.

Manipur is a land of many beautiful churches. These churches are also a popular tourist attraction of the state. Lots of tourist visits these churches every year. Some of the popular churches in Manipur are Senapathi Catholic Church, St. Joseph's Cathedral and Tamenglong Baptist Church, Christian Center Church and Imphal Central Church. 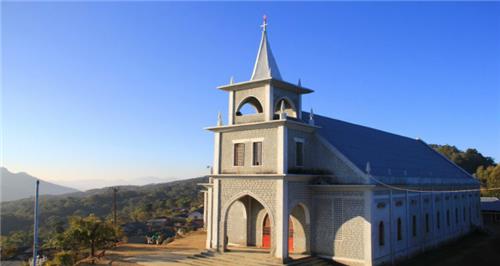 The Catholic Church is located in Senapati district in Manipur. It is a local shrine and a place of worship for the local people of the place. It is also a tourist spot of Manipur. Daily as well as weekly prayers are conducted and it is attended by a large number of people. Religious events are also organized in the Church in a grand manner.

St. Joseph's Cathedral of Imphal is a one of the famous pilgrim center for the Catholics of Imphal. The cathedral is built in Anglo Manipuri fusion and its architecture is absolutely beautiful. St. Joseph's Cathedral is an important landmark of Imphal. The surrounding hills add to the beauty of the church. Daily prayers are held in the church that is attended by huge number of devotees.

The Baptist church is located in Tamenglong. It is a very sacred and popular tourist spot of Tamenglong. Regular prayers are held in the church and are attended by lots of people. Another very important feature of the church is the religious meetings. There are about 30 government employees as the members of the church. 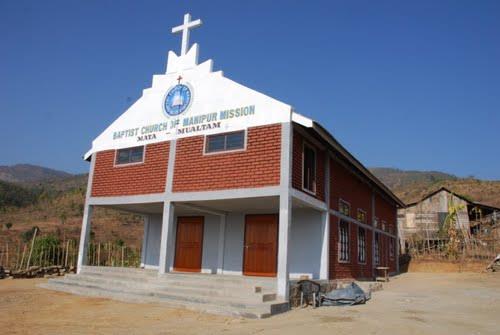 The Central Church of Imphal is located on the airport road and is beautiful Church dedicated to Lord Jesus. Huge number of devotees attends the daily and weekly prayers held at the Church. The church is also known as the Imphal School of preaching. Every Sunday and Wednesday bible classes are conducted by the church. The church has a full time youth minister and a full time preacher who heads the activities and gathering of the church. Many youth programs and other religious events are conducted regularly by the church in the nearby areas.

Manipur is a places full of many temples. Manipur is known for the Shree Govindajee temple located here. It is the most important temple. The temple is dedicated to Lord Vishnu. The other temples located here are Shri Krishna Temple, Hanuman temple and Sacred Jackfruit Tree Site, Vishnu temple. The religious spots in Manipur are the following: 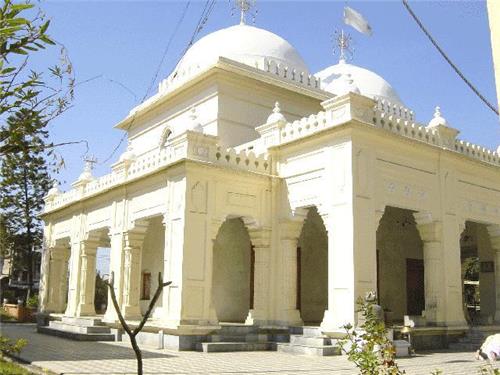 Shree Govindajee Temple is a historic Vaisnavite temple located adjoining the Royal palace of former Maharajas of Manipur. It is located in the old Kangla palace area. The temple has a beautiful structure and simple outlay. There are twin domes, a paved courtyard and a large raise congregation hall in the temple. The temple of Shree Govindajee is the abode of four deities, all of them incarnations of Lord Vishnu. According to Hindu mythology, Lord Vishnu is considered as the preserver of mankind.
The Shree Govindajee temple has a shrine dedicated to Lord Vishnu with holy images of Balaram and Krishna on one side and Jagannath on the other side. The temple is situated in the center of the city of Imphal and there are regular arrangements of prayers and dances in the temple premises. The Holi festival, also known as Doljatra or Yaosong in Manipur, is celebrated with great festivity here. During this festival, Manipuri boys and girls perform the Thaba Changba dance.

The Shri Krishna Temple is located at Brahmapur Guru Aribam Leikai Imphal and is believed to have been built in 1722 AD. The temple is built in typical Bengali hut type architecture common in Bengal. This temple is built on the banks of the Imphal River. The pedestal of the temple is raised in three layers of bricks with flying staircases and perched walls and dome.

The artistic importance of the temple is that there are different idols of Lord Krishna showing different events from his childhood to adult stage. The modulation of the idols is done in a very artistic manner. The dome of the temple is decked out with floral motifs above which there is a resting podium of a circular crown which further carries two Kalasas (pitchers) placed one above the other. This temple is operated by the International Society for Krishna Consciousness (ISKCON) and Krishna Janmasthami is marking the birth of Lord Krishna is celebrated with much festivity.

This temple is situated in Imphal on the banks of Imphal River amongst the groves of Mahabali forest. It was built by King Garib Niwaj in 1725 AD. The temple has a beautiful idol of Lord Hanuman in human form. The temple is built in hut type of Bengal style. The temple is important and monumental evidence in the religious history of Manipur.

This site is located in Kaina around 35 kms towards the eastern side of Imphal on the Imphal-Yairipok road. It is believed that during the reign of Bhagyachandra Maharaj, the sacred idol of Shree Govindajee was sculptured from the parts of a jackfruit tree cut from Kaina in complying with a dream in which the King saw the image of the Lord in certain manifestation. The idol of the Lord, being sacred to from the ardent Vaishnavites, Kaina therefore assumed importance as a place where the image of the Lord first originated and consequently became a religious and historical place for Meitei Hindus. Raas Leela is performed in this sacred place every year. 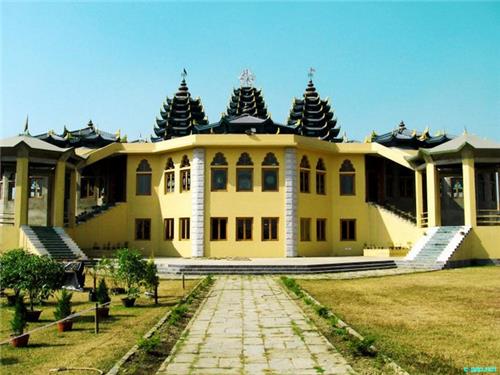 The Vishnu temple is a symbol of the remains of the ancient times. The temple is a protected historical monument under the ministry of HRD (Archeology) Government of India. According to history King Kymba wanted to conquer Kyang, a Shan kingdom. He attacked Kyang along with the king of Pong. After the battle was won the area was divided between the two kings. King Pong gave an idol of lord Vishnu to Kymba. Kymba kept the idol at Lumlangdong. Kymba built the Vishnu temple at Bishnupur.
The installation ceremony of the statue of Abdeitya enshrined in the Vishnu temple took place in 1793 AD. The temple was built in 1467. It is built in the style of Chinese architecture. It is a two storied building. The roof of the temple is conical. A huge veranda is attached to the temple. The main deity of the temple is lord Vishnu. The temple is visited by a number of pilgrims and saints every year.

Every year traditional Moirang lai Haraoba is celebrated in the month of May. During this festival people from all over the state gather to seek blessing of Ebudhou Thangjing. The festival continues for a month. On every Sunday a mega dance and songs programme is organized.

The Babupara Mosque is located in the capital city of Imphal. It is place of worship for the Muslim community in Manipur. The mosque is also an important landmark of the city of Imphal. Hundreds of devotees gather here to offer prayers, during the festival of Id. Tourists can also hire an auto rickshaw or a cab to reach the Mosque. Government as well as private buses is also available to reach the Mosque. The Mosque is just 1km from the main city Junction.